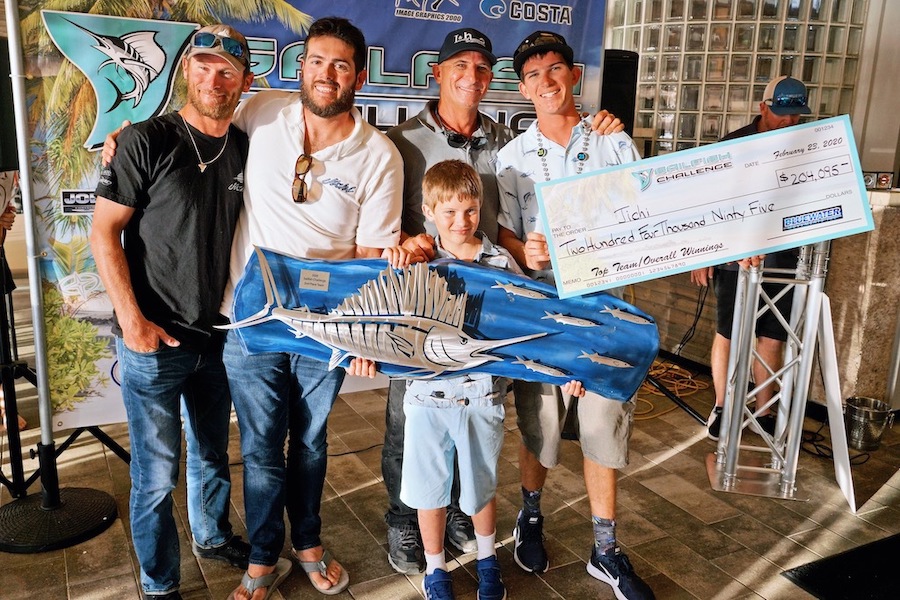 Pompano Beach, Fla. (Feb 25, 2020) – The 17th Annual Sailfish Challenge was one for the history books in many ways. 55 teams were treated to an amazing kick-off party hosted for the first time by “Oceanic” at Pompano Beach Pier, a premier new seafood & steak restaurant located on the beach in Pompano. The tournament partnered with Costa and their “OneCoast” initiative to help with the ongoing fundraising effort for Bahamas Relief from Hurricane Dorian. Team FFMD won the “Lucky Fish” 50/50 raffle at the kick-off party and generously donated their winnings back to OneCoast! 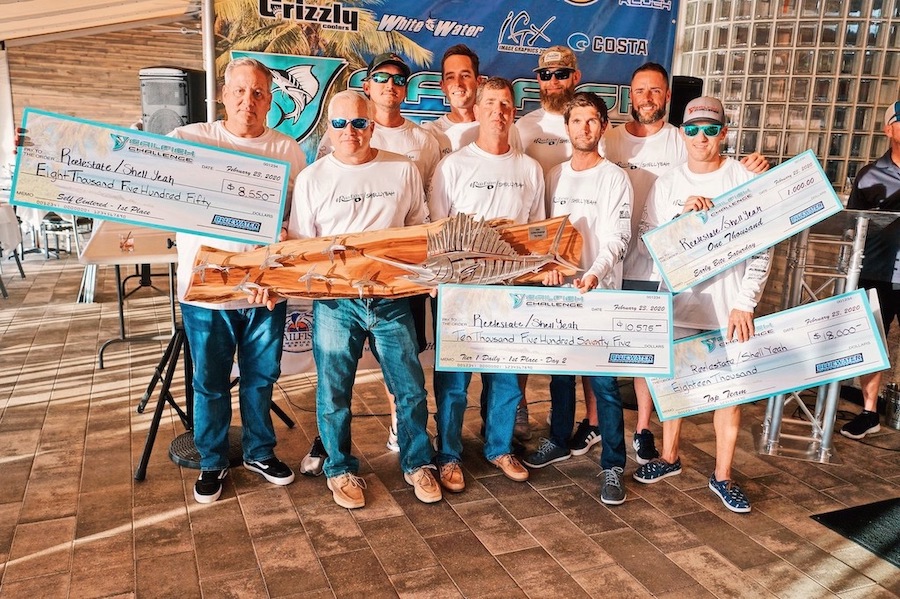 An approaching cold-front brought strong northerly winds on Day 1 of the tournament with the teams fishing on the north end of the boundary battling the roughest conditions. With the fleet spread out from Jupiter to Miami, it was a slow pick for most of the day up and down the line. As time pressed on, the boats to the south managed to find a few more fish than their competitors to the north. Three boats, Doing it All/Hardway, Reel Addiction, and Potential finished the day in a three-way tie with 4 releases, but it was Doing it All/Hardway that came out on top, based on time, in their Yamaha powered 39’ Contender. Reel Addiction were the big money winners on Day 1 with daily winnings of $51,705. Team Chop it Up had the best meatfish catch of the day with 118.8 pounds that earned them a daily payout of $7,560. 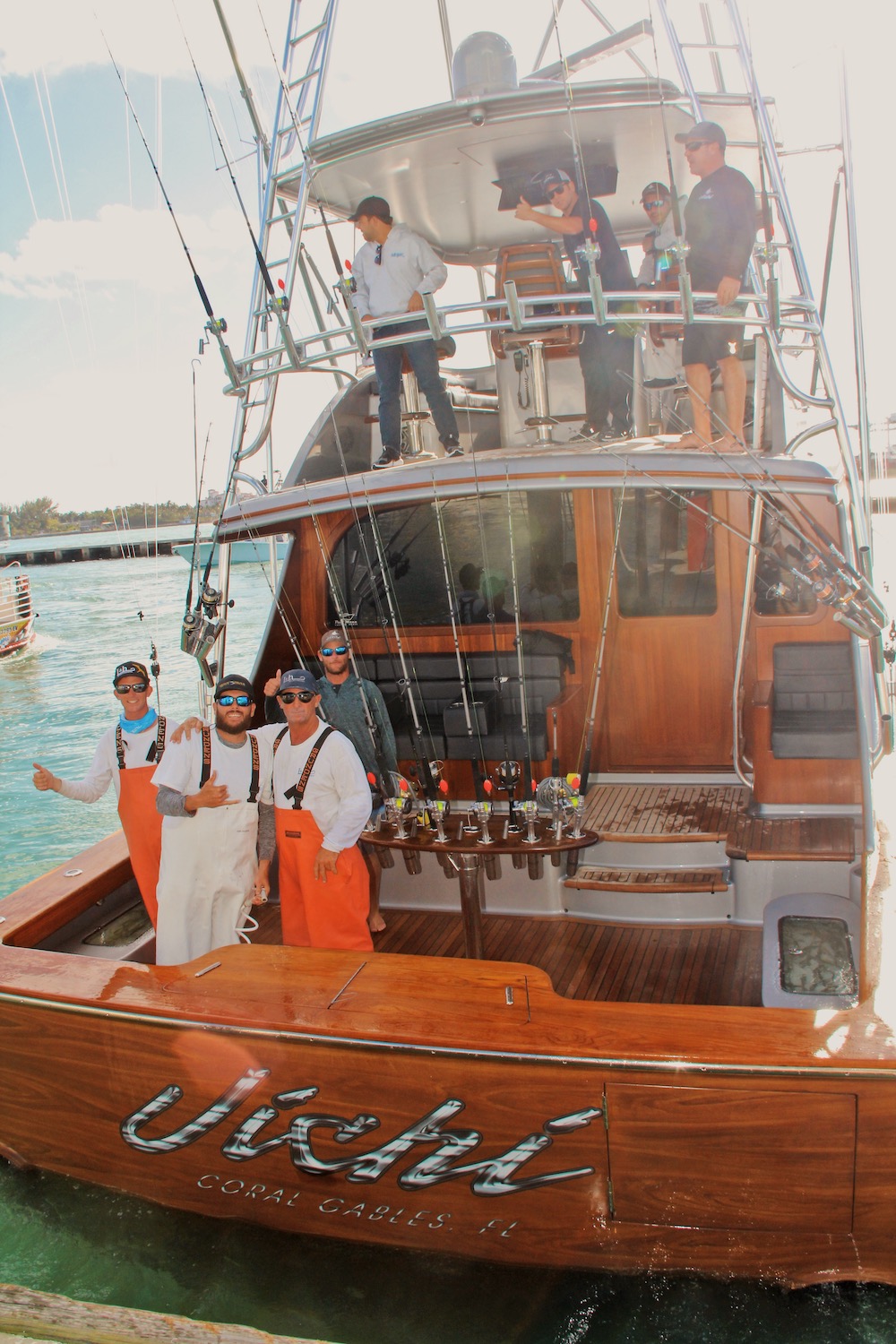 Processed with VSCO with g8 preset

Heading into Day 2, a forecast for gale force winds and 12 to 15-foot seas led to a postponed fishing schedule from Saturday to Sunday. While the seas improved on Sunday, the sailfish bite remained slow. Despite tough fishing, team Reel Estate/Shell Yeah stayed steady on their Mercury powered 39’ SeaVee releasing 3 fish before noon to jump into the lead with 6 releases. As the day pressed on teams Jichi, Reel Addiction, and Doing it All/Hardway evened the score with 6 releases a piece as well. It was a battle to the end, but Reel Estate/Shell Yeah was able to hang on to their time-based lead and win the tournament, earning a check for $38,125. Jichi finished in 2nd overall with 6 releases and a massive check for $204,095! Reel Addiction finished in 3rd with winnings of $67,275 followed by Doing it All/Hardway in 4th with 13,075 and Bar South in 5th with 5 releases and a $47,405 payday. 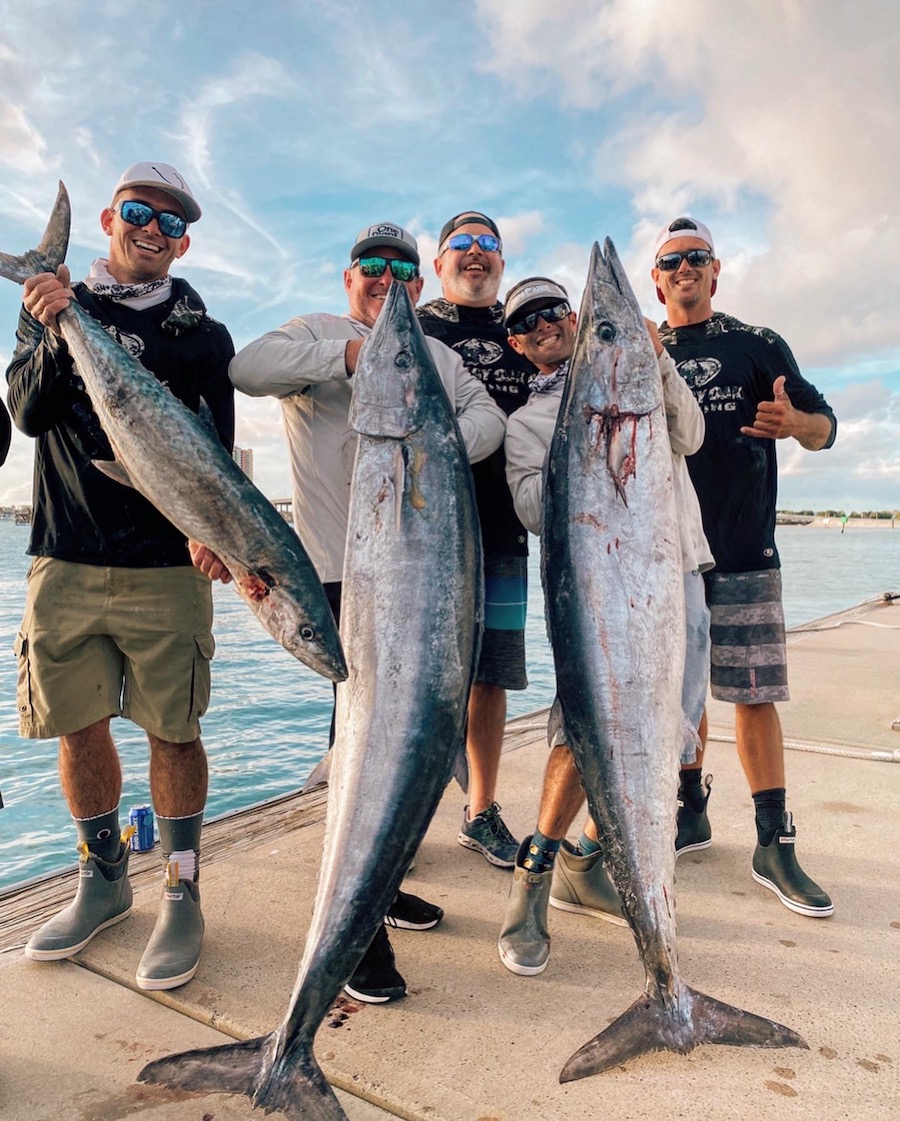 Without question, it was the exceptional meat fishing action that created all the buzz in the 2020 Sailfish Challenge. A red-hot kingfish bite off Palm Beach had crews battling to keep baits in the water all day. Team Chop it Up improved on their Day 1 catch with four massive kings on Sunday that ranged from 31.2 to 49.8 pounds for a total weight of 156.1. They posted a combined weight of 274.9 pounds over the two days of fishing to win the aggregate weight division and a check for $22,590.

By midday on Day 2, rumors were flying around about a record setting meatfish catch on board team Old No 7. When they arrived at the dock in Palm Beach the rumors were put to rest. Not one, but two giant wahoo, plus a cobia and a kingfish were on their way to the scale. Both wahoo, set new tournament records in their category with the first fishing weighing in at 84.7 pounds and the second at 85.5 pounds! Even more amazing, both fish were caught on 16-pound test line, and 30-pound leader with a circle hook! Their 4-fish bag on Day 2 was an astounding 223.9 pounds, for a 56-pound average per fish! Old No 7 won $39,080 in meatfish money and earned a bonus $1,000 gift certificate from Grizzly coolers for the heaviest fish of the tournament. 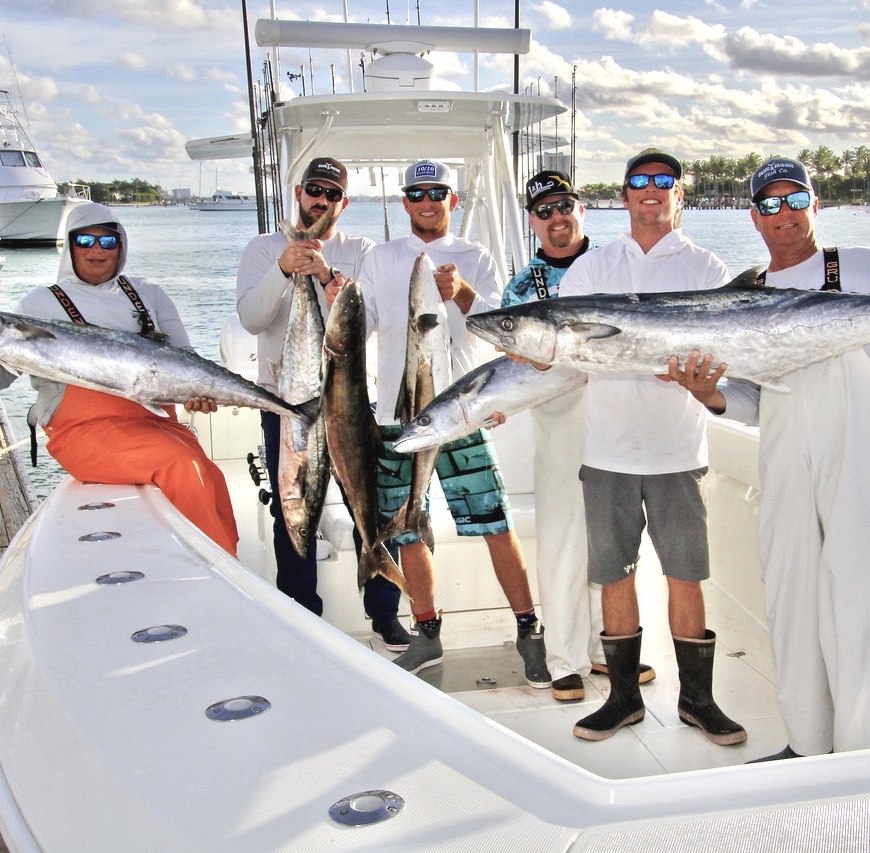 The 3rd Annual Coin Challenge competition kept the team spirit alive during the tournament.  Seven groups of 8 teams mixed it up to see which color group would come out on top and win the commemorative challenge coins.  In the end, the blue color group emerged victorious with a total of 26 releases. Team Native Son was the grand prize winner, earning a 3 day/2 night vacation package to Margaritaville Hollywood Beach Resort courtesy of Landshark Lager.

Nicole Paul-Hus on team SkipJac 2 was the top female angler with 1 release and Benji Fernandez on team Potential was the master angler of the tournament with 3 releases. Branch Office defended their Non-Pro division title for the third year in a row with 2 releases. 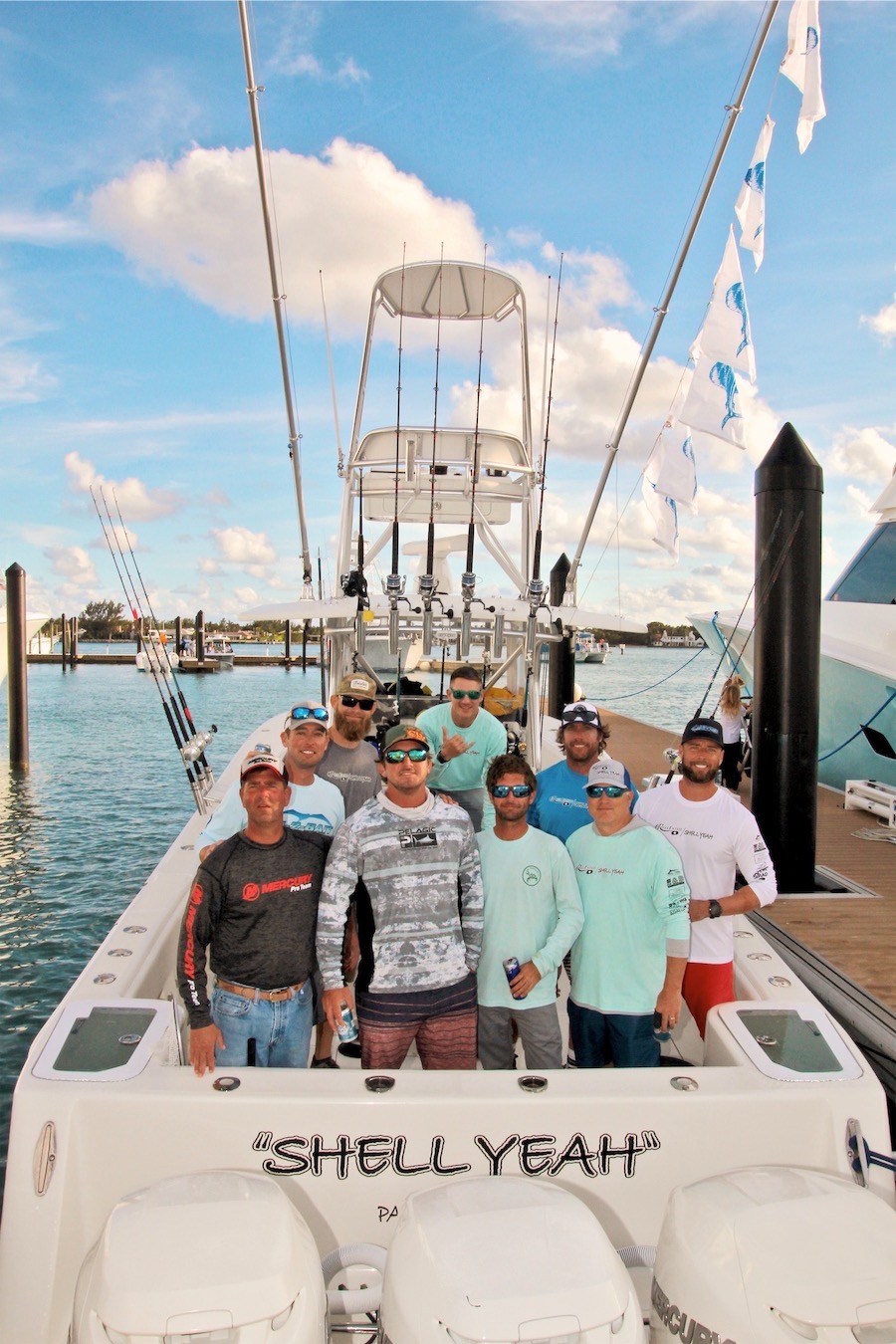 The tournament concluded at Blue Moon Fish Company, a 5-star restaurant on the beautiful intracoastal in Lauderdale-by-the-Sea. Anglers indulged on an amazing array of food and Reel Estate/Shell Yeah was treated to a delicious steak and lobster dinner at the champions table for the tournament. The race for the burgundy jacket has one more event to determine who will claim the world’s most prestigious sailfishing title. Team BAR South holds the lead with 57 points followed by Jichi with 51 points and Reel Estate/Shell Yeah in 3rd with 49 points, and several other teams are still in the hunt heading into the final leg in Miami at the DoubleTree Grand Hotel with Final Sail on April 1-4.

For more information on the Sailfish Challenge, visit www.SailfishChallenge.com or call 954-725-4010. The entire Quest for the Crest schedule and series standings can be found at http://www.questforthecrest.com