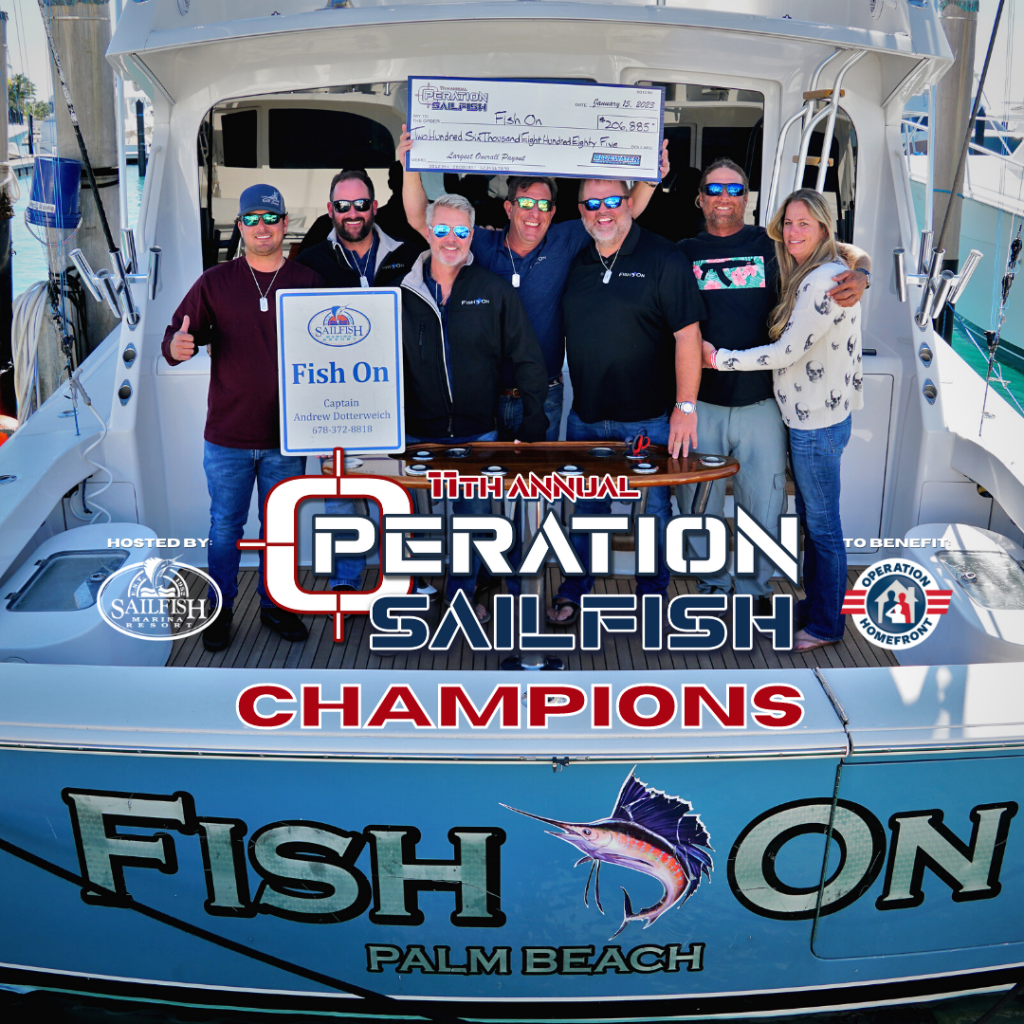 Operation Sailfish 2023 is in the Record Books

Leg 1 of The Quest For The Crest Sailfish Series, Operation Sailfish, is in the record books, literally! This year, a record-setting field of 58 teams turned out at Sailfish Marina Resort to battle it out for a $513,050 purse and the prestigious champions’ dog tags.

In addition to a record-setting fleet of teams, the signature “Take A Hero Fishing Day” hosted its largest number of heroes with 36 veterans and 19 teams. The “Take A Hero Fishing Day”  is an event hosted in advance of Operation Sailfish competition days to thank our true American Heroes, active and retired United States military, for their selfless commitment to protect & serve. Operation Sailfish proudly supports its charitable partner, Operation Homefront, a 501(c)(3) organization whose mission is to build strong, stable, and secure military families that can thrive in the communities they’ve worked hard to protect.

The bite on Day 1 was relatively slow with 44 total releases on the day. Two of the top 5 teams on Day 1 were local boats. Singularis had 4 releases, and local charter boat, Fish On, wasn’t far behind with 3 releases. Representing the small boat gang on their 36-foot center console, team Bad Boyz/Audacious held the first place spot on time over Singuaris at the end of the day with 4 releases. The team came firing out of the gate with three of the first ten releases, two of which were released by Carter Wendorff, the Top Male Angler of the weekend.

While the sailfish bite was light on Day 1, there was nothing light about the Wahoo and Kings that team REEL E SEA put on the scales for Day 1. They cleaned up the Meatfish Division reeling in a monster 69.8lb Wahoo and a 47.3lb kingfish on their Yamaha powered 44 Contender along with two other stout kings on Day 1. 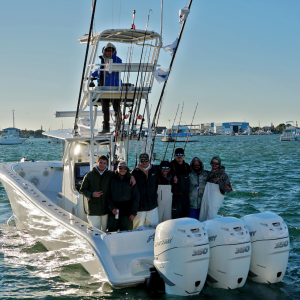 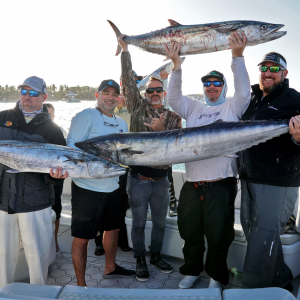 Day two was another story as the weather conditions dropped to 44°F at lines in with winds pushing out of North to Northwest at 15 to 20 knots.  With 31 releases in the first hour, the teams forgot about the cold as the bite started to heat up. Six of those 31 tallies were called in by Captain Andrew Dotterweich from Fish On, moving them into 1st over Bad Boyz / Audacious.

Other notable day two moves were made by the defending 2022 Quest For The Crest Champions Contender One/Costa with five releases on day two that moved them into 3rd place overall. Hydrosphere, after finishing 18th on the leaderboard on day one with one release, had six releases on day two, giving them what they needed to land inside the top 5 of the leaderboard in 4th place overall. Reel Lucky was able to find the pot of gold early in the day with five releases on day two, beating out Old No. 7 on time, to claim 5th place overall. They earned 1st place in the added value ‘Non-Pro’ division of the tournament.. MDALA made a strong comeback on Day 2 as well with six releases that gave them a 2nd place daily finish behind Fish On for Day 2. 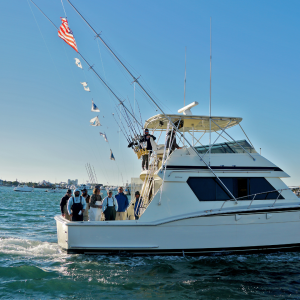 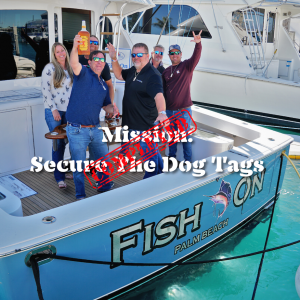 All eyes at Sailfish Marina were on Fish On coming into the week after their 3rd place finish in last week’s West Palm Beach Fishing Clubs’ 86th Annual Silver Sailfish Derby, with seven releases. While a 3rd place finish in the oldest running sailfish tournament in the world is certainly something to celebrate, Fish On knew the job wasn’t finished. Anglers Andy Strine, Jamie Barnett, Josh Jasper, Raul Gonzales, Sasha Lickle, and Todd Willard put the hammer down with three late bite releases on day one, earning them 1st in the Late Bite Friday, then put the nail in the coffin with six early bite releases on day two, earning them 1st the Early Bite Saturday, collectively earning the team a total payout of $206,885.

Fish On…congratulations on successfully completing your mission; the title of 2023 Operation Sailfish Champions is now yours to hold forever.

On to the Next One

Sailfish Challenge, Leg 2 of the 2023 Quest For The Crest Sailfish Series 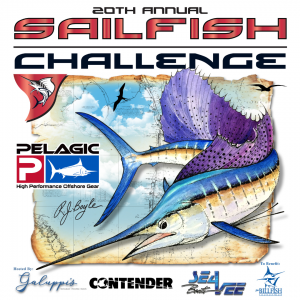 The 20th Annual Sailfish Challenge hosted by Galuppi’s Restaurant & Sports Bar in Pompano Beach and benefiting The Billfish Foundation is set for February 22-26, 2023. Leg 2 of The Quest For The Crest allows teams to compete out of three inlets. With 3 checkpointsfrom Government Cut in Miami to Hillsboro Inlet in Pompano Beach and Lakeworth Inlet in West Palm, flexibility is the name of the game. If the bite shifts north or south, this signature format gives teams the opportunity to get to the fish and still make check-in at the end of the day!

The 3-inlet format isn’t the only signature aspect of the Challenge. The tournament also boasts a unique ‘Coin Challenge’ competition that randomly assigns teams in groups by color to see who can release the most sailfish in the tournament! Call us in the office at 954-725-4010 or visit fish.bluewatermovements.com to register your team today.

ABOUT THE QUEST FOR THE CREST SAILFISH SERIES

This iconic series hosts some of the top billfishing teams in the sport. Teams in this 3-leg series are expected to compete for an estimated purse of over $1.7 million. However, the most coveted award – The Crest – doesn’t come in the form of a cash prize. The Crest represents the pinnacle of tournament sailfishing. It is viewed as the highest accolade bestowed upon a team.  Presented in jacket form, competitors must emerge as the most dominant among an elite field in order to don the burgundy jacket. Privilege is earned, not given, on this quest to crown a world champion.

Bluewater Movements, Inc., is a sports marketing company based in South Florida, the sport fishing capital of the world. Throughout the past 27 years, our team has developed some of the most successful competitive fishing events in the industry. Our background in tournament fishing, coupled with our expertise in event marketing, has enabled a premium experience for tournament anglers and sponsors. Within our portfolio, there are seven wildly popular fishing tournaments, all hosted at various venues across South Florida.

The word on the street is that @killboxfishing put

“We got ID!” and we’re hungry for more! Awes

Professor Bunn 👨‍🏫 is back with more Tips

One way trip to Pompano Beach now boarding, if you