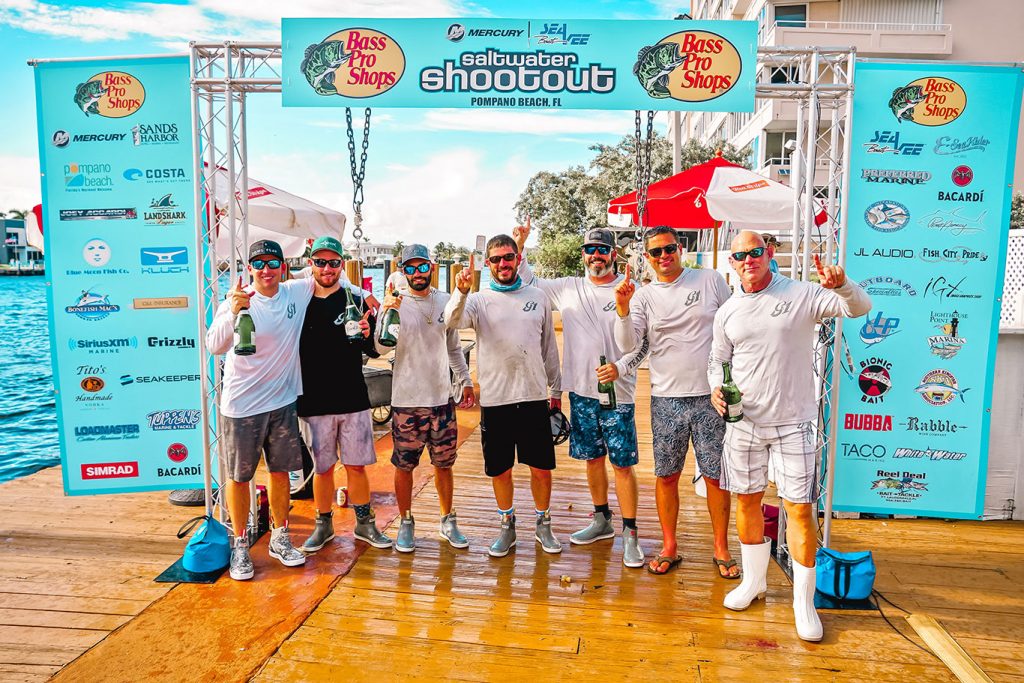 Pompano Beach, Fla. (July 21, 2020) –The weather was wet, and the fishing conditions were tough, but that didn’t slow down the 77-boat fleet at the 22nd annual Mercury/SeaVee Saltwater Shootout, July 16-19! Leg 2 of the 2020 Pompano Beach Saltwater Circuit was flip-flopped with the Saltwater Slam this year from pushing the start of the series back due to the COVID-19 shut down. With fishing deemed one of the few activities to participate in safely these days, the tournament anglers were ready for some good old fashioned competition and that’s just what the Shootout delivered. Over 450 anglers were registered and competed for the $236,747 meat-fishing purse and the tournament was nothing short of action packed! 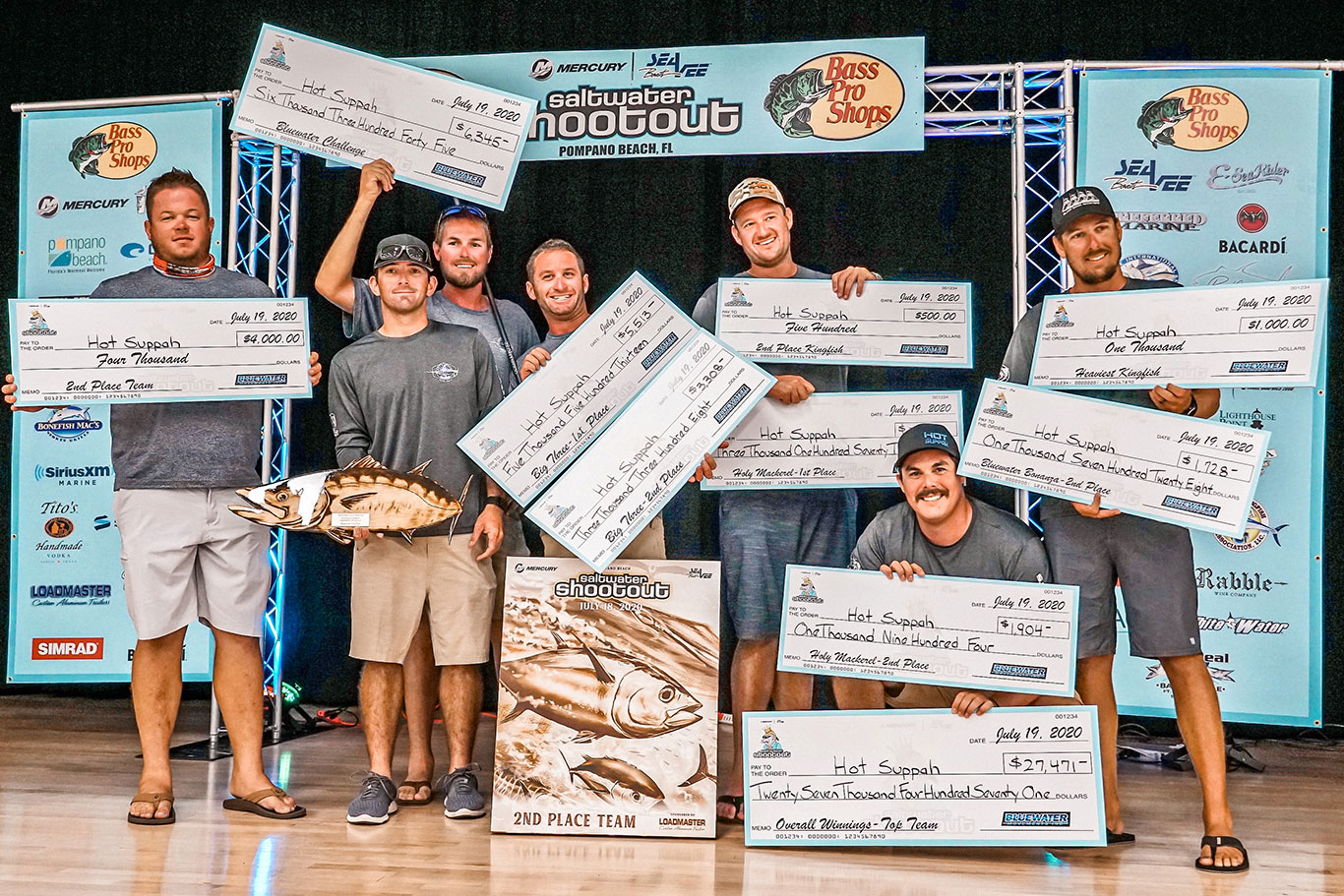 With clever and creative execution, the 2nd leg of the PBSC series was a social-distancing success! The Saltwater Shootout began the tournament week with the annual Kick-off Party and Captains Meeting hosted at the Pompano Beach Civic Center Thursday, July 16th.Through detailed planning with city and county representatives, temperatures were checked at the door facemasks were required, and the entry-list limited to anglers only. As always, the incredible, Blue Moon Fish Co. served anglers menu favorites including oysters on the half shell, peel and eat shrimp, swordfish jambalaya, melt in your mouth prime rib, and more. The remote bars were flowing courtesy of Landshark Lager, Rabble Wine, Tito’s Vodka, and Bacardi. PBSC series sponsors like Bubba Blade, Bass Pro Shops, Grizzly Coolers, and White Water apparel kept the Spin-to-Win wheel, raffle, and auction areas stocked with great prizes to win.

As luck would have it, the weather conditions declined just before the morning checkout on tournament day. Foul weather gear was standard uniform for the teams on their way out the inlet for the 7am start. There were 2 optional categories on everyone’s agenda this day. The “Pick 3” had a whopping $89,820 up for grabs, and the 3 target species were kingfish, tuna, and wahoo for the chance to win the massive jackpot. The “KDW” jackpot boasted a stout payout reached $63,720, with teams having to catch the heaviest combo of kingfish, dolphin, and wahoo. Only time would tell if those checks would be held up by anyone! The Bass Pro Shops main weigh-in stage at Sands Harbor Resort and the express weigh-in at Lighthouse Point Marina opened up at 4 p.m. as the boats raced through the inlet to make the 4:30 check-in deadline. 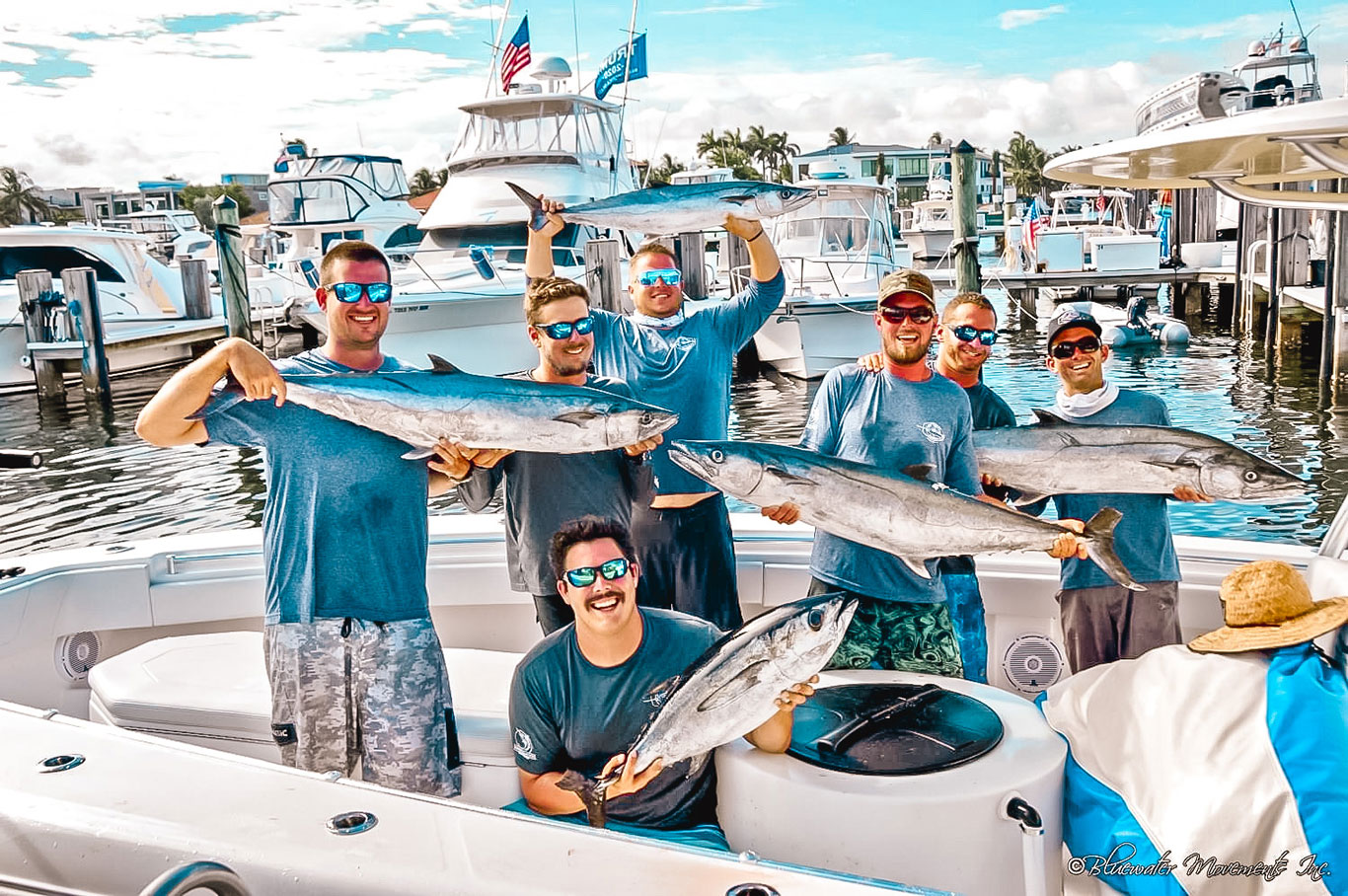 As the fish hit the scales, it looked like the top contenders from last month’s tournament, the Saltwater Slam we’re lining up to be the ones to beat yet again. Unfortunately, there were no dolphin weighed at the Shootout, which meant the “KDW” jackpot would roll-over to the final leg in August. The first and second place spots in the Shootout were separated by only 2.5 pounds with Gator One taking the top spot over Hot Suppah. During the offseason, Lonnie Bergeron, upgraded to a new boat and a new captain, a decision that has paid dividends so far. Captain Ryan McBride and his Gator One crew delivered back-to-back tournament wins with a total weight of 145 pounds in the Shootout! They won five categories and angler Corey McBride was the Top Male Angler with a total of 78.6 points. Gator One has racked up over $44,600 in winnings over the past two tournaments. Their biggest rival, Hot Suppah, cashed the largest check in the Shootout, which included the heaviest fish overall and a second place finish with a total of 142.5 pounds that earned a check for $27,471!

PBSC veterans, Mercury and SeaVee powered team Vitamin Sea led by Captain Cliff Maddock rocked the scales, earning them 3rd place with a total weight of 128.7 pounds! Dina Maddock was the Top Female Angler with 50 pounds and her team walked away with a grand total of $5,672! In 4th place was the Mercury/SeaVee powered team Stakeout winning Heaviest Tuna and weighing a total of 104.2 pounds for $2,500. Rounding out the top five was Captain Dean Pazin who actually got lucky last season and won the Joey Accardi sponsored RAM 1500 truck! Pazin and his Salty Dawgs crew weighed 96.1 pounds at the Shootout for $1,250. Captain Nick Avila and his Offseason crew were the top non-pro team earning $3,865 and Lenny’s Luck won the small boat division in their 26’ SeaVee for a bonus $1,500 payout as well. The top junior angler was Jonah Bennett on Finsanity II with 42.4 points and Gracie Johnston on Extractor was the top pee wee angler with 44.3 points.

The Saltwater Shootout was an incredible tournament, with 25 teams walking away with well-deserved checks at the awards ceremony. The local favorite, Bonefish Mac’s provided lunch for the anglers, as $83,207 were paid out to the winners. The series title Showdown Crown will be a nail-bitter as team Gator One closed leg 2 on top with 62 total points, followed by Hot Suppah with 56 points, and How Ya Reelin/Kingfish Cartel with 48 points and several other talented teams in striking distance. Who will win the 2020 custom Showdown Champions rings? We’ll find out Saturday, August 15th on the weigh-in stage for Leg 3, the Saltwater Showdown!

For a complete list of Saltwater Shootout results, visit: https://www.bluewatermovements.com/tournaments/summer-series/shootout/results/ 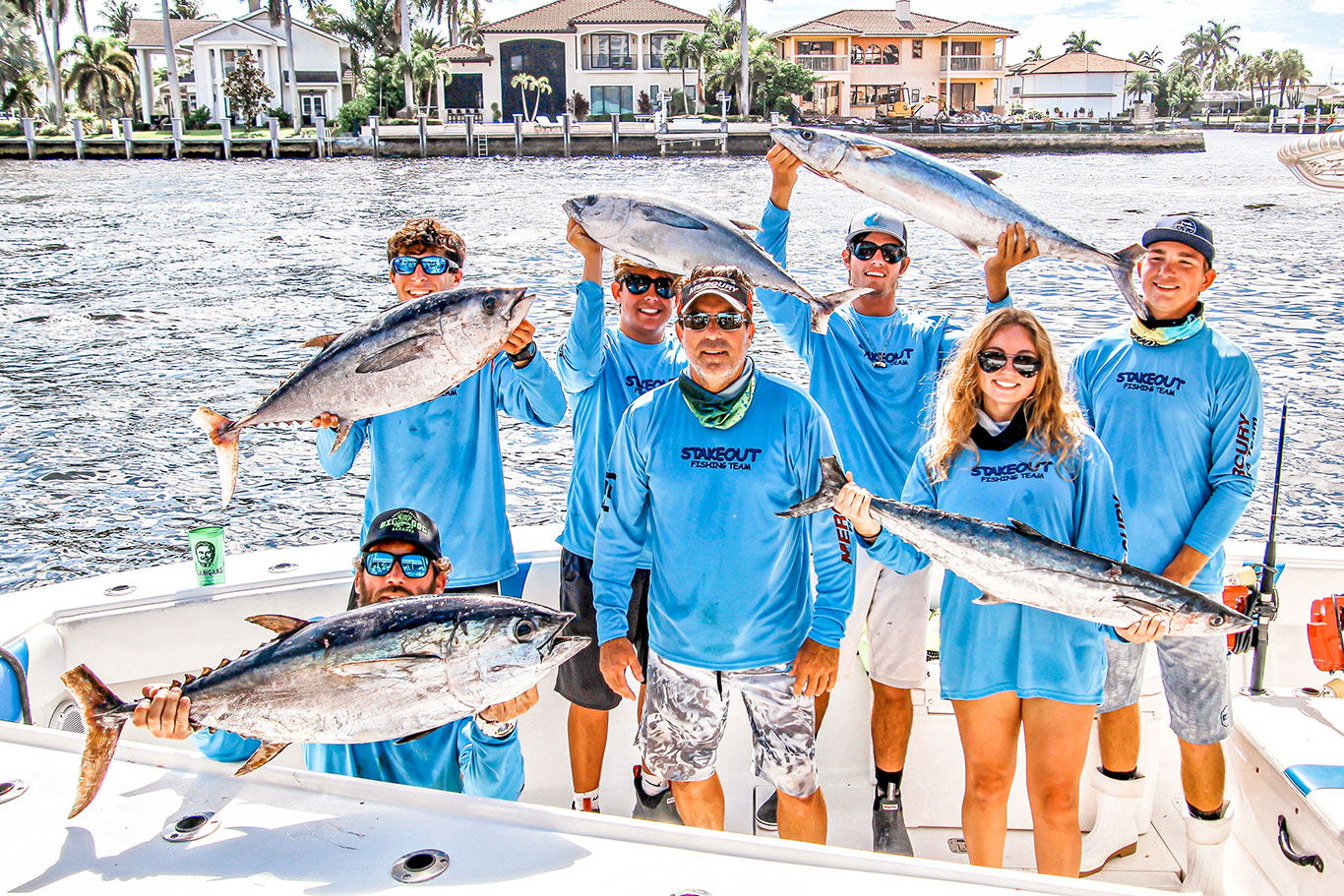 Bluewater Movements, Inc., is a sport’s marketing company based in South Florida, the sportfishing capital of the world. Throughout the past 25 years, our team has developed some of the most successful competitive fishing events in the industry. Our background in tournament fishing coupled with our expertise in event marketing has enabled a premium experience for tournament anglers and sponsors. Within our portfolio there are six wildly popular fishing tournaments, all hosted at various venues across South Florida. 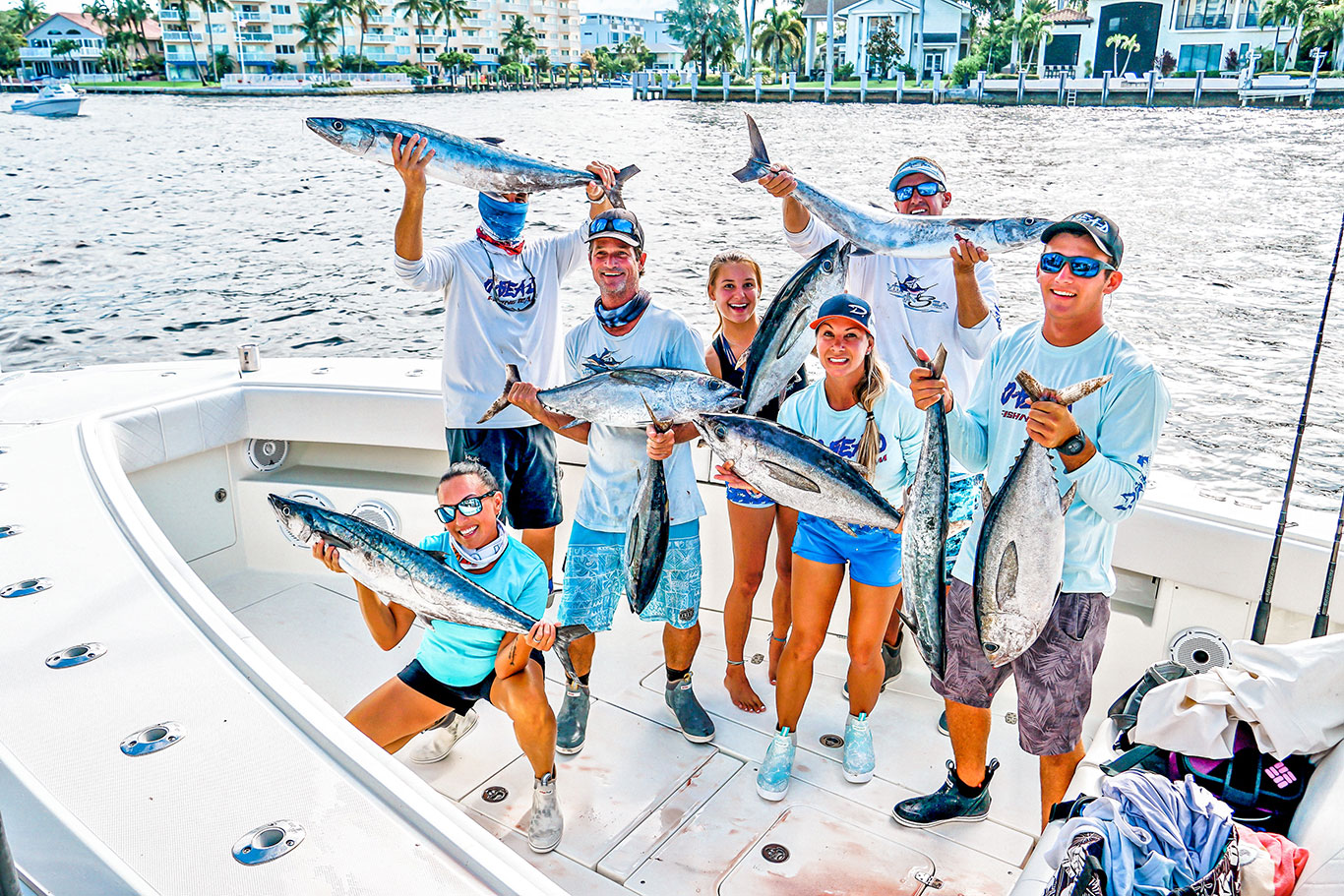